THE CHALLENGES, VISION, AND LEADERSHIP THAT LAUNCHED EPA 50 YEARS AGO 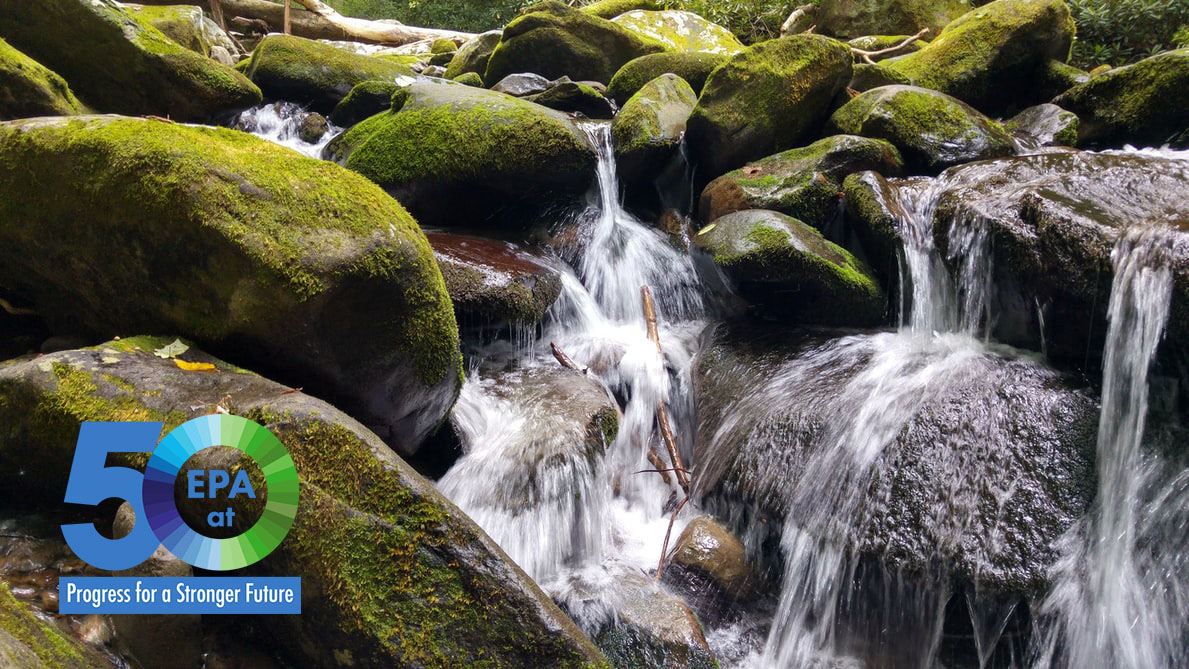 The National Stormwater Center is proud to join in celebrating EPA’s 50th birthday, December 2, 2020. In this article, we’ll look back 50 years to see how EPA got its start.

A half-century ago, our nation was in the grips of an unpopular war in Vietnam, a maze of new social norms, and the historic challenges of the Civil Rights Act. No less momentous was the growing awareness that our nation’s lands, air, and water were in sad condition.

Rachael Carson’s epic Silent Spring warned that as we poison nature with pesticides she poisons us back. Off the coast of Santa Barbara, CA, a blow-out in Union Oil’s well field produced what was at that time the largest release of oil to waters in the nation’s history. Color video of oil-coated seabirds streamed into living rooms across the country. In Cleveland, floating oil and woody debris on the Cuyahoga River was ignited by sparks from the nearby railroad. The resulting fire drew attention from Time Magazine which ran a file photo on its cover and cautioned that a person falling in would decay rather than drown.

Exactly ten months later, on April 22, 1970, the first Earth Day was celebrated. An estimated 20 million people—one-tenth of the country’s population at the time—took part.

Just a week after Earth Day, and in his second year in office, President Richard Nixon submitted to Congress a list of recommendations for organizing environmental and other functions within the executive branch. His authority to do so came from something called the Reorganization Act. Originally known as the Economy Act (it was created during the Great Depression), the Reorganization Act allowed the President to assess efficiencies and economies within the executive branch and recommend changes for Congressional approval. These changes would automatically take effect in 60 days, barring resolutions of disapproval from both chambers. (That authority expired in 1984.)

To develop his reorganization plans, Nixon appointed a President’s Advisory Council on Executive Organization. Commonly known as the Ash Council for its chairman, industrialist Roy Ash, the council also included Texas governor John Connally, who was riding in the car with JFK when the President was assassinated; Frederick Kappel, chairman of AT&T; George Baker, dean of the Harvard Business School; Richard Paget, who helped reorganize the U.S. Navy; and Walter Thayer, a New York lawyer, investment official and president of the International Herald Tribune.

The Council’s work product was delivered to the President in 14 installments. The eighth of these, dated April 29, 1970, was titled “Federal Organization for Environmental Protection.” Often called the Ash Memo, the document began with this summary:

“The President’s Advisory Council on Executive Organization recommends that key anti-pollution programs be merged into an Environmental Protection Administration, a new independent agency of the Executive Branch. In your February 10 Environmental Message, you pledged yourself to ‘… repair the damage already done, and to establish new criteria to guide us in the future.’ The Environmental Protection Administration will be the principal instrument for the fulfillment of that pledge.”

Elsewhere, in a paragraph labeled “Inadequacy of Present Organization,” the Council offered this blunt assessment:

“Our National Government is neither structured nor oriented to sustain a well-articulated attack on the practices which debase the air we breathe, the water we drink and the land that grows our food. Indeed, the present departmental structure for dealing with environmental protection defies effective and concerted action.”

On July 9, 1970, having reviewed the recommendations contained in the Ash Memo, President Nixon transmitted to Congress his final proposal (formalized as “Reorganization Plan Number 3 of 1970”) along with a sort of extended cover letter titled “Special Message from the President to the Congress About Reorganization Plans to Establish the Environmental Protection Agency and the National Oceanic and Atmospheric Administration.” from the President. (For practical reasons, plans for NOAA were included in the same reorganization document.)

In preparing the Special Message, the President followed most of the Council’s recommendations, with two exceptions. One was minor: where Ash’s group had proposed to create an “Environmental Protection Administration,” Nixon chose the term “Agency.”

The other difference, far more substantive, had to do with the role of the new EPA relative to the existing Council on Environmental Quality. (The CEQ had been established January 1, 1970, as part of the National Environmental Policy Act.) Ash and his team had proposed that the CEQ be absorbed into the new EPA, but Nixon decided otherwise. While EPA would assist the CEQ “in developing and recommending to the President new policies for the protection of the environment,” the two organizations would remain separate.

As the President saw it, “the Council [on Environmental Quality] focuses on what our broad policies in the environmental field should be; the EPA would focus on setting and enforcing pollution control standards. The two are not competing, but complementary—and taken together, they should give us, for the first time, the means to mount an effectively coordinated campaign against environmental degradation in all of its many forms.”

Richard Nixon was not, as a matter of principle, a fan of large federal bureaucracies. So it is all the more remarkable that, after considering the recommendations and rationales of the Ash Council, he felt that environmental quality warranted not just one but two independent agencies. 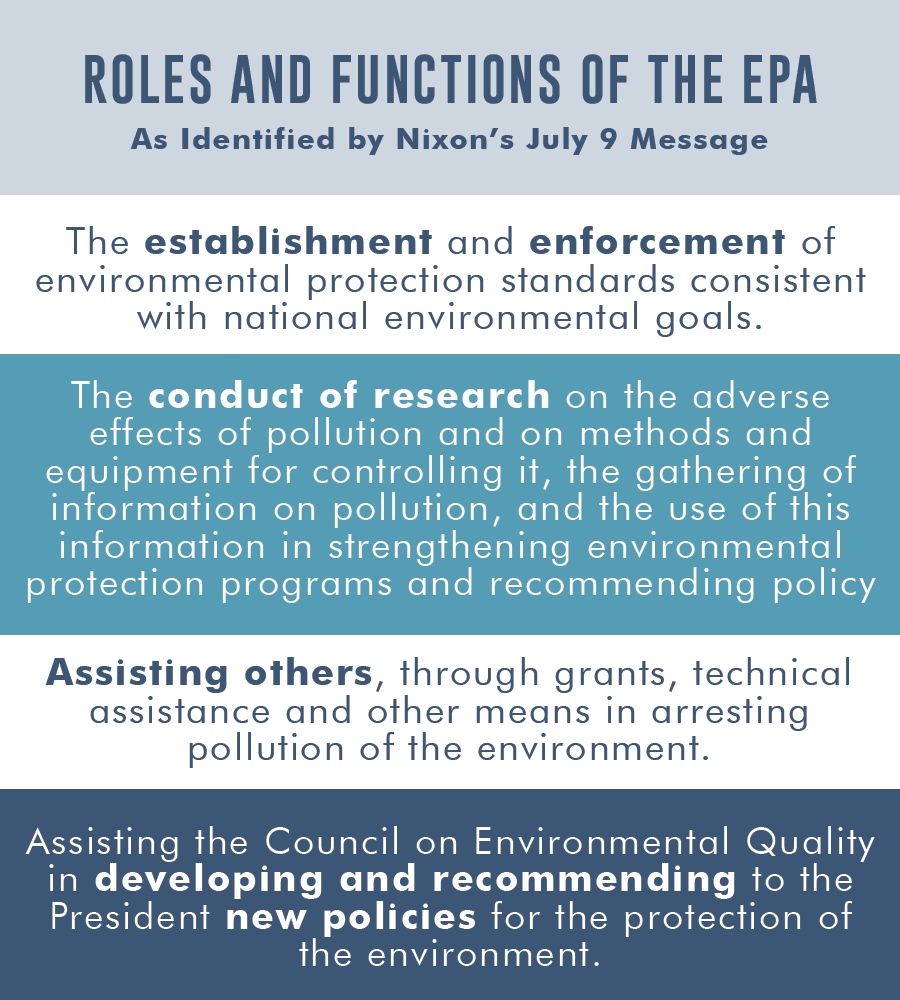 Though the recommendations had been finalized, EPA wasn’t officially established until December 2, 1970. That was the day the agency’s first administrator, William Ruckelshaus, 38, was unanimously confirmed by the Senate following two days of hearings before its Public Works Committee, where he had also been unanimously endorsed.

A mild-mannered Indianapolis attorney with degrees from Princeton and Harvard, Ruckelshaus was a moderate Republican who had served as counsel to the Indiana Stream Pollution Control Board and helped draft the Indiana Air Pollution Control Act of 1961 before joining the U.S. Justice Department in 1969.

His commitment to enforcement had drawn praise from legislators. Public Works chairman Jennings Randolph (D-W.Va.) said the nominee made an “excellent impression,” and Sen. Edmund S. Muskie (D-Maine) told him “I hope you become Mr. Clean.”

When Ruckelshaus said he would lead an antipollution campaign “as forceful as the laws provide,” committee members seemed “particularly impressed,” according to the New York Times. “[They] seemed pleased to hear Mr. Ruckelshaus say that he thought the states, which are often reluctant to crack down because they are competing for industry, would enforce the law more aggressively ‘if a strong Federal presence was behind them.’”

But Ruckelshaus seemed eager for the challenge. As he told a reporter a few days before hearings began, “I am optimistic that man can reverse what his stupidity has caused.” Otherwise, he said, “I wouldn’t have taken this job.”

And so, with the recommendation of the President, the endorsement of the Senate, the apparent goodwill of the public, and the optimism of a talented and principled director, the new agency was off to a good start.

The National Stormwater Center honors EPA and the thousands of men and women who have served with that agency over the past 50 years. They, along with countless federal, state, and local government partners, have much to be proud of, and we, as citizens, have much to be grateful for.

Paul Davis is a member of Cumberland River Compact’s Board of Directors. His career was with Tennessee’s Water Pollution Control Agency where he was state director for 24 years. Since leaving government service, Paul teaches classes on Clean Water Act programs through the National Stormwater Center.