Conveniently located next to the John Seigenthaler Pedestrian Bridge in Downtown Nashville, the River Center at the Cumberland River Compact is the prime place to host your event. A short walk across the bridge from Lower Broadway and only a few minutes drive from all of Nashville’s most popular neighborhoods, we’re the ideal and most budget-conscious event space for those looking to host in style.

HISTORY OF THE BRIDGE BUILDING 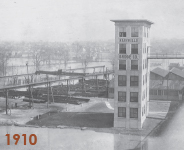 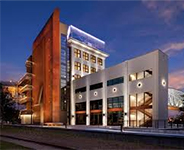 The historic Nashville Bridge Company Building (NABRICO) was awarded LEED-Platinum Certification. LEED, Leadership in Energy and Environmental Design, is the foremost rating system developed by the U.S. Green Building Council for distinguishing buildings that excel in being designed, constructed, maintained and operated for improved environmental and human health performance.

The platinum rating makes the Nashville Bridge Building the world’s highest-rated building within the Core and Shell category and the first building in the state of Tennessee to receive a platinum rating.

Prior to the Bridge Building earning its score, the structure with the highest LEED Core and Shell ranking was the Dockside Building in Victoria, British Columbia. There are 4,467 total structures within the LEED Core and Shell category. NABRICO is now regarded as one of the most sustainable buildings in the world as well as a key structure in Nashville’s expansive riverfront redevelopment plan to add green spaces, greenways, public gathering places, outdoor event venues and community health and wellness opportunities to the public.