Stewarding an Island in the Cumberland

In 2021, Hill’s Island was generously gifted to the Cumberland River Compact by our friends at TennGreen Land Conservancy. The Compact carries on the vision of stewarding Hill’s Island by promoting the island’s unique natural resources and cultural history.

Read About the Acquisition 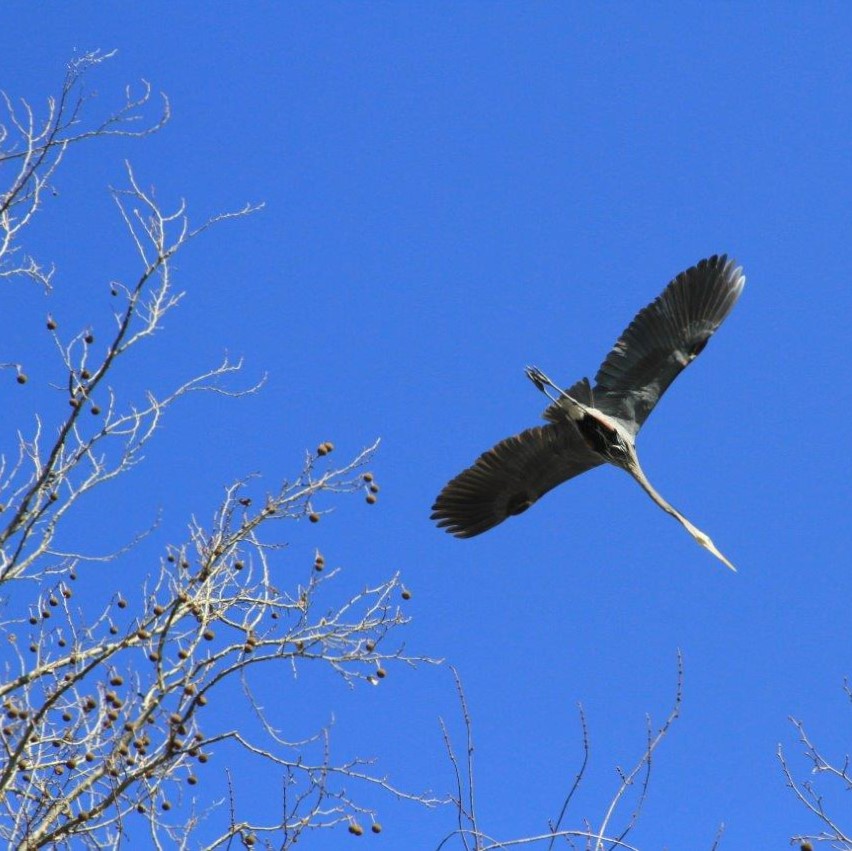 WHERE IS HILL’S ISLAND LOCATED?

Hill’s Island in Nashville, TN is a 20-acre parcel of wooded land within the Cumberland River that stretches nearly a half-mile adjacent to the northwestern bank of Neely’s Bend, just before the Old Hickory bridge. The Cumberland River forms a small channel to the west of the island. The west channel measures approximately 30 feet wide and seven feet deep, creating a wilderness corridor for paddlers, fishermen, and island hikers. The east side of the island is sunny and gently slopes to the main channel of the Cumberland, making it ideal for walking, swimming, and fishing. 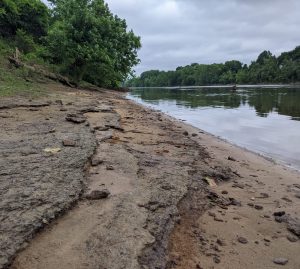 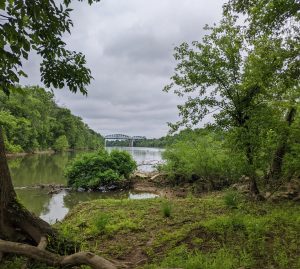 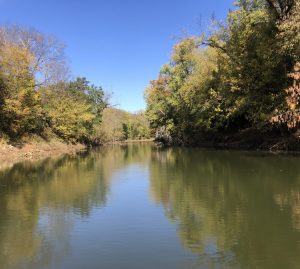 The area that is now Davidson County has been home to Native American communities for at least 13,000 years. Over this vast period, Indigenous people adapted to and thrived in the rich natural environment of the Cumberland River Valley. Residential lots across the Cumberland from Hill’s Island contain the archaeological evidence of Archaic and Woodland period communities and also includes a large shell midden, formed between 5300 and 3000 BCE as generations of site inhabitants fished for freshwater gastropods and bivalves from the Cumberland’s rocky shoals. On the opposite bank, a Mississippian period village and cemetery overlooked the island from 1200-1350 CE. Although we do not have direct evidence of Indigenous communities on Hill's Island, we can infer from these nearby sites that it was likely an important part of the landscape. Both terrestrial game and abundant bird populations would have been attracted to the island, while adjacent shoals and riffles were home to a sustainable shellfish population for thousands of years. The smaller channel running west of the island would have been an ideal location for fishing, and the construction of fish weirs. Stands of local river cane provided animal habitat, as well as raw materials for making fish weirs, baskets, and tools. Finally, annual flooding would have made the island’s soils ideal for Archaic and Woodland period cultivation of plants like sunflower, goosefoot, knotweed, and later Mississippian period farming of beans, squash, and corn.

The only direct mentions of Hill's Island during this time come from the autobiography of Emily Donelson Walton. She recounts her time at nearby Cleveland Hall and an enslaved man named George who spent his summers on Hill's Island. The island at that time was owned by the Donelson family, however, it's unclear how and why it was named Hill's Island. Hill was a prominent slave trader in Nashville and New Orleans. Nashville’s proximity to the Cumberland River made it an important center in the domestic slave trade, and it served as the second largest slave port in the Volunteer State. Indeed, the buying and selling of Black men women and children was Nashville’s first and most lucrative big business. These factors give some credence to the assertion that Hill’s Island may have been used as a quarantine station for individuals Hill intended to sell. The small space located on the river just north of the city would have been perfect for this use along with a small farm to grow crops needed to feed the people temporarily housed on the island. Nonetheless, evidence supporting this thesis remains elusive, and the only account we currently have of life on the island are the childhood memories of Emily Donelson Walton.

Hill’s Island was next purchased by the Seventh-Day Adventist Church. The church started by Reverend William Miller would begin to eye Madison as a site for the creation of a farm and school, and under the leadership of Ellen G. White who believed she saw the property in a vision, purchased the site in the early 1880s. Once the church formally took control of the property in 1904, they quickly created what became known as the Nashville Agricultural and Normal School adjacent to Hill’s Island, an institution founded on the principles of self-sacrifice, thrift, and self-government. The school opened its doors in 1905 with fourteen students. The school would later have a hospital and sanitarium attached to it providing a space where individuals could receive holistic treatment for their illnesses.

RECREATION ON THE ISLAND

As the twentieth century progressed, other visitors to the island returned home with stories to tell about their excursions. Nashvillians travelled to the island for hunting and relaxation. During the fall of 1919 as the debate upon Women’s Suffrage in the United States was heating up, the YWCA held its summer camp on Hill’s Island. The two hundred participants spent their stay at the camp exploring the island, singing, and swimming. In June 1931, Hill’s Island was transformed into a recreational site known by locals as Pleasure Island. Pleasure Island, open to much fanfare with a novelty band performing at the new pavilion and dancing that they hope would last until midnight. The owners also built beach houses for guests and a promenade. Food and beverages were available for the guests, and according to reports, several local businesses sought to charter the island for their annual outings. 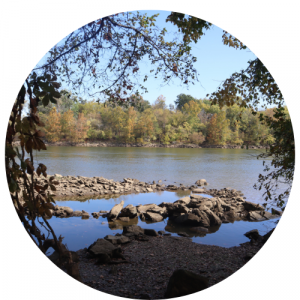 Listen to Dr. Learotha Williams, with Tennessee State University, talk about the history of Hill’s Island. 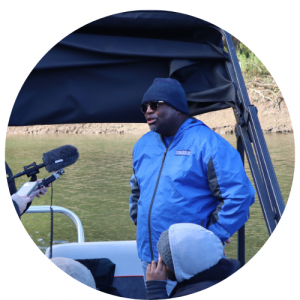 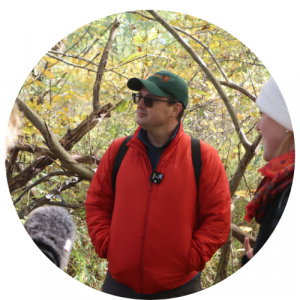 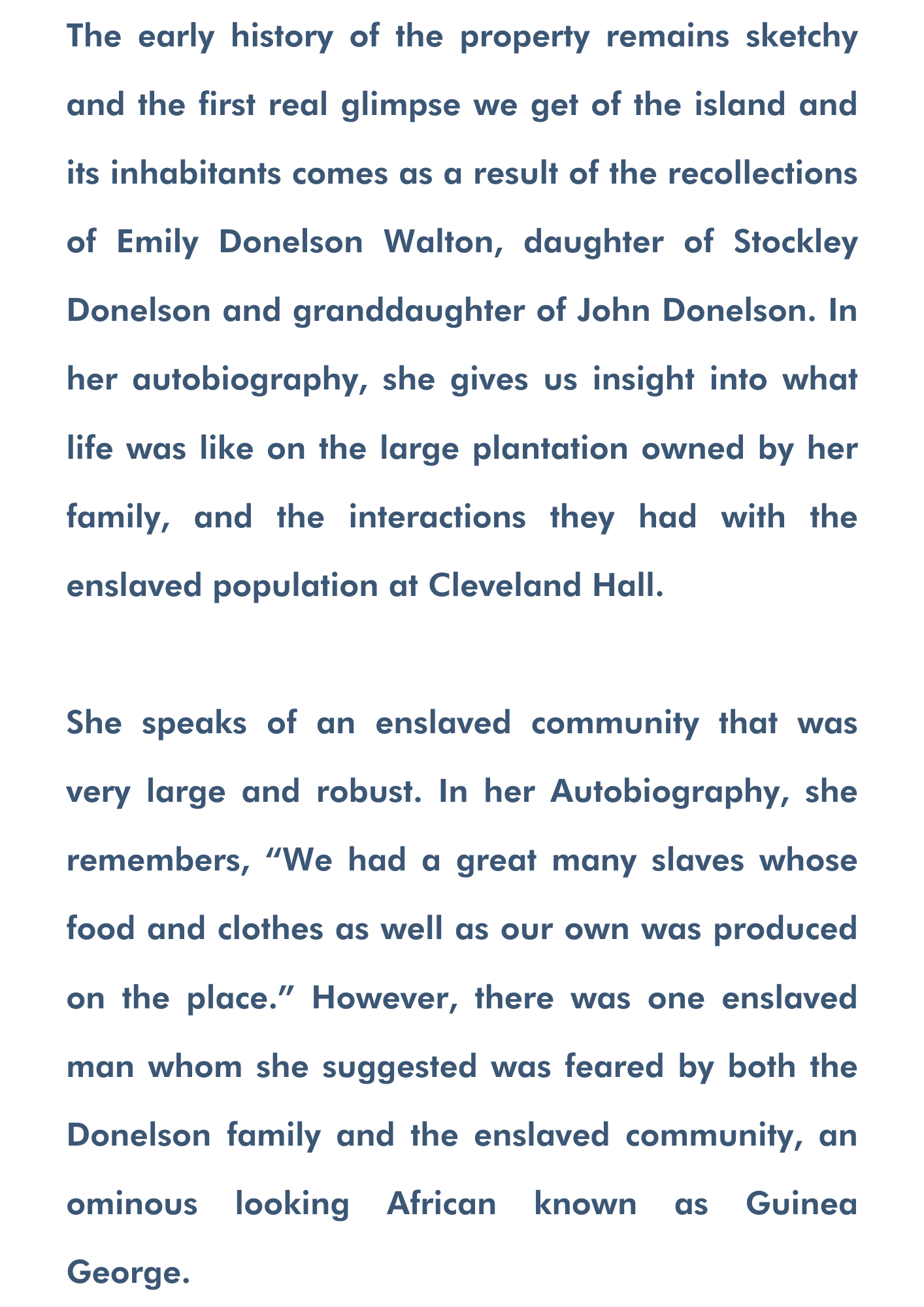 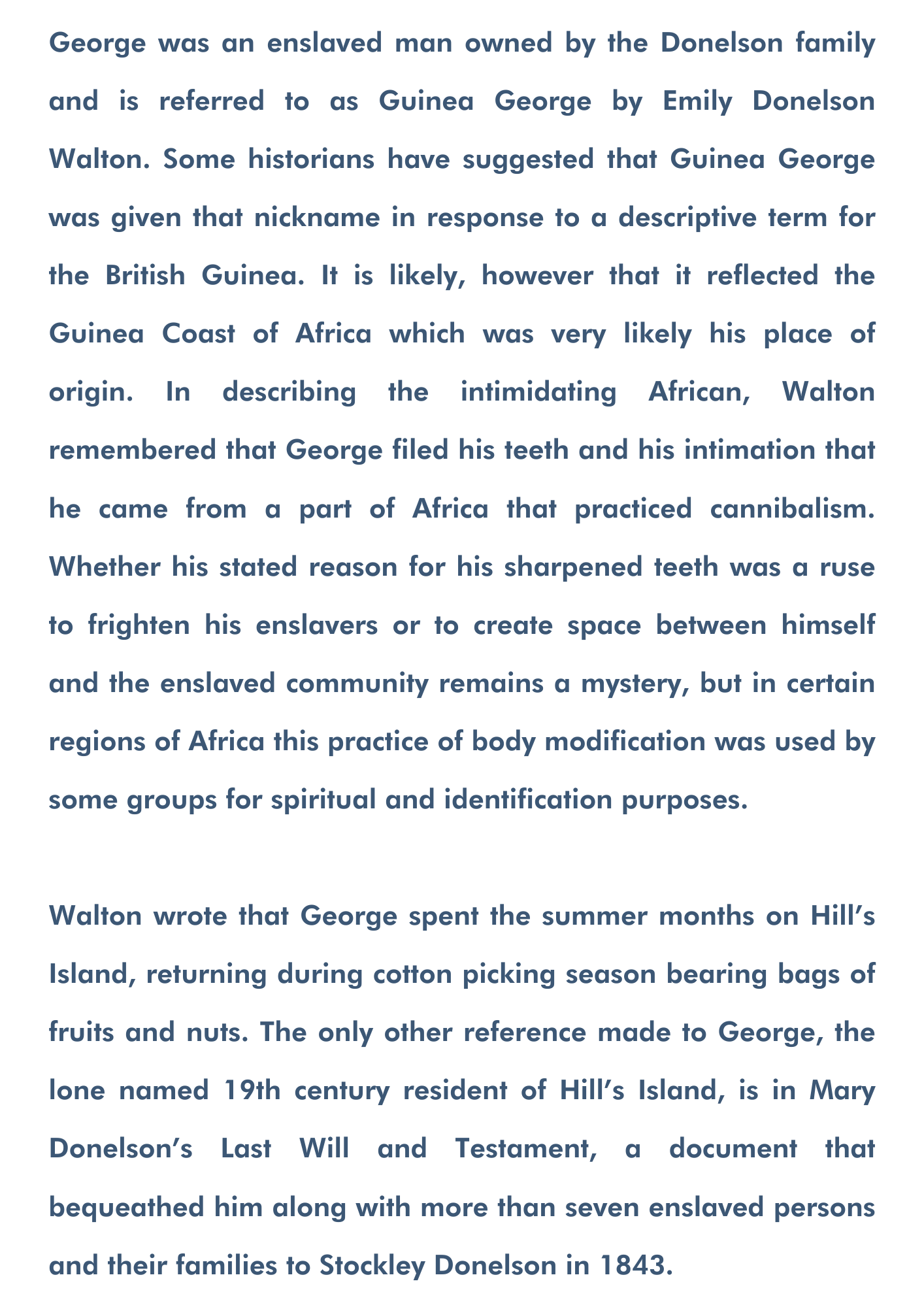 View Mary Donelson’s Last Will and Testament where George is listed.

Listen to Dr. Williams on the shores of Hill’s Island reflect on the experience of George and Nashville’s Black past. 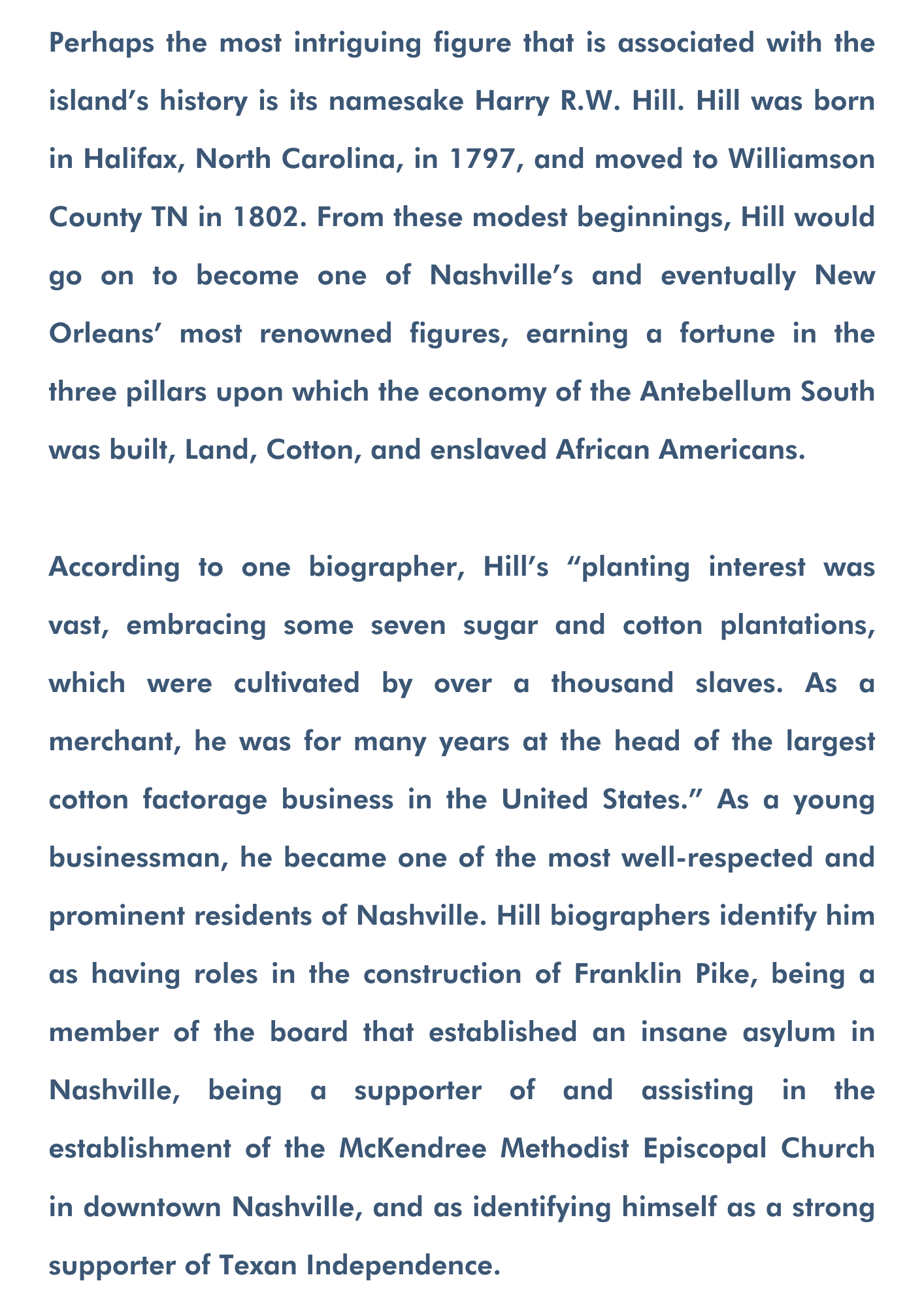 Listen to Dr. Williams talk about Hill and his role in Nashville. 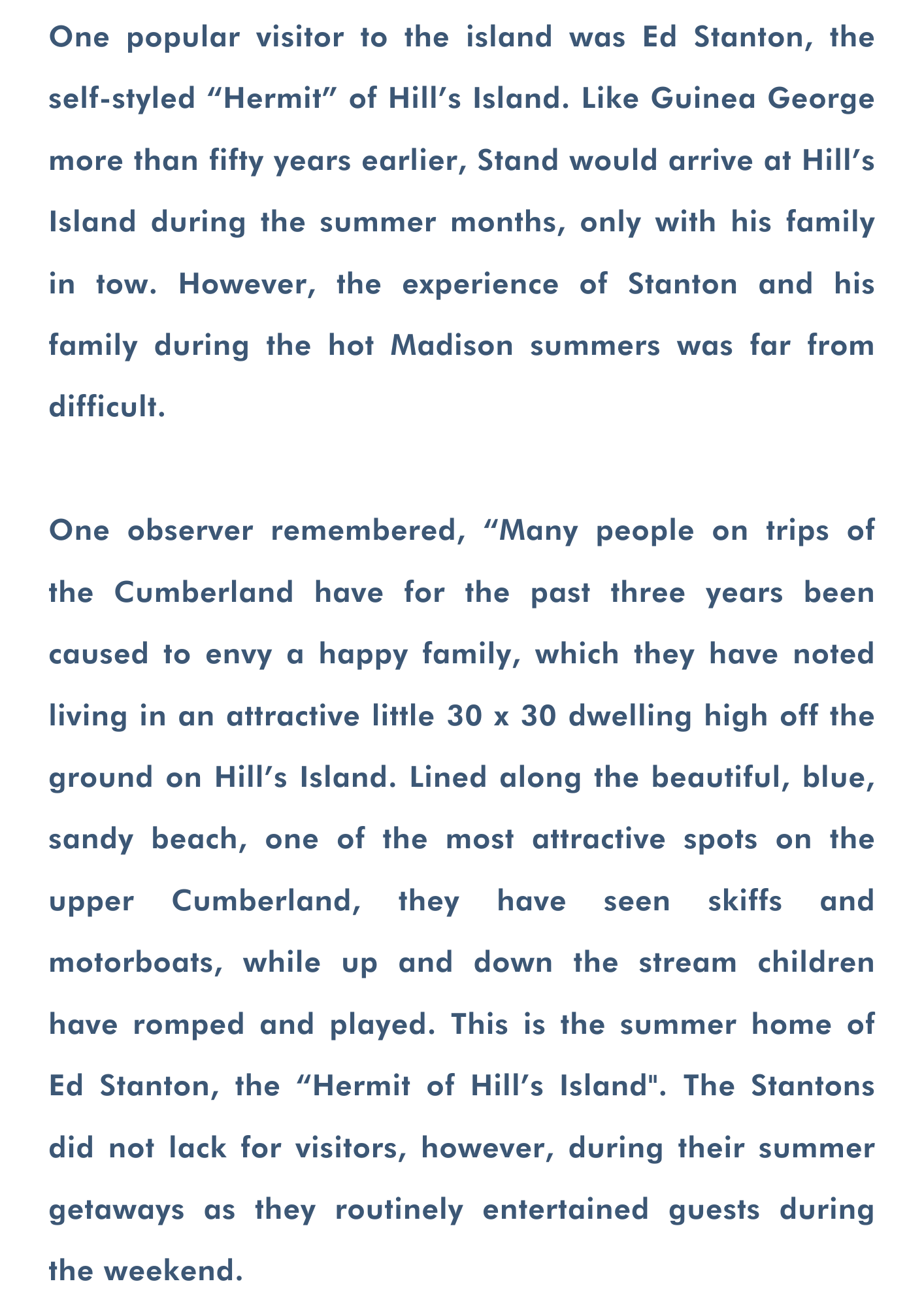 George remains one of the most elusive and interesting people on Hill’s Island. Listen to Dr. Learotha Williams discuss George.

The history of Hill’s Island’s evolution into a recreational site during the first three decades of the twentieth century lies in stark contrast to its history during the Antebellum period. Having a history that dates back to a period long before any Europeans arrived in the area and bearing the name of one of the most celebrated businessmen in the South at that time, its past remains as sketchy today as it was when Donelson first received the land grant giving him rights to the property. Had it not been for a young girl’s account of a frightening enslaved African and the wealth accumulated as a result the enslavement of these people by one of the most prominent businessmen Harry R.W. Hill, this island would arguably be one of the many unremarkable islands that appear in Tennessee’s Rivers.

Yet, Hill’s Island emerges from this period with a new identity, a rebirth that coincided with the Progressive Era in American History and emphasized the need for residents to have access to parks and other outdoor spaces. Ironically, its rise as a recreational space coincided with the rise of Jim Crow Segregation in Nashville which meant that this space—one that may have been an area in the city that served as a gateway to enslavement in Middle Tennessee—could not be enjoyed as a recreational space or a place of joy by the people for whom its name and very existence may have been a symbol of the breaking up of African American families, intergenerational trauma, and terror. In short, the story of Hill’s Island is important, because it provides a peculiar view into the economic, social, and political history of Nashville from its territorial period to the present.

Listen to the Story of Hill’s Island

River islands are ubiquitous and provide unique and fundamental ecosystem services for river corridors. They host diverse ecosystems and act as natural biogeochemical reactors that process excess nutrients and filter contaminants — think of them as part of the river’s liver. 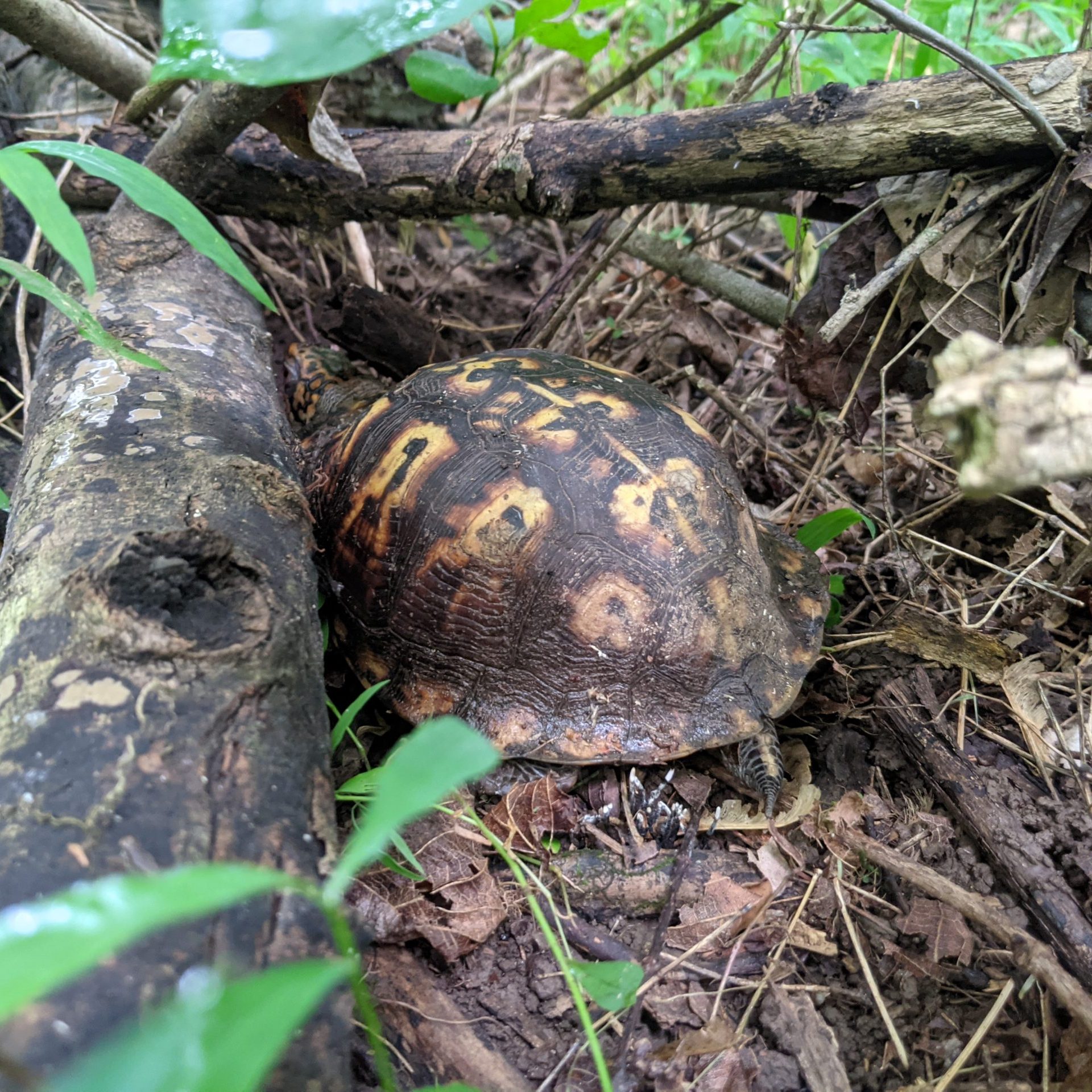 Exploring the island on foot reveals a pawpaw grove -Tennessee’s native citrus tree- at the island’s north end and sycamores, red maples, and hackberries that stand tall throughout the property. A wide variety of wildlife is attracted to the property, including deer, turkey, herons, raccoons, snakes, otters, and a bald eagle. There is concern about exotic invasive species that have taken over much of the island. Due to the varying water levels of the river, especially during high water, the island collects debris. There is some evidence that the island was cleared due to the age of the trees on site. However, some large and old trees remain. 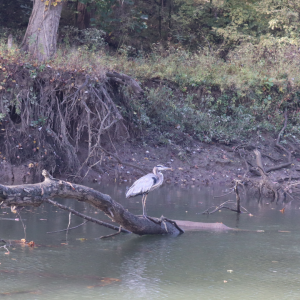 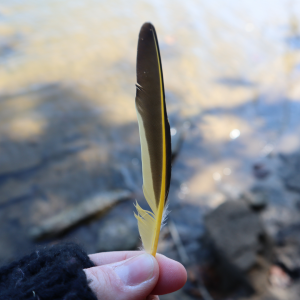 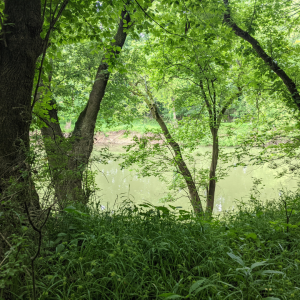 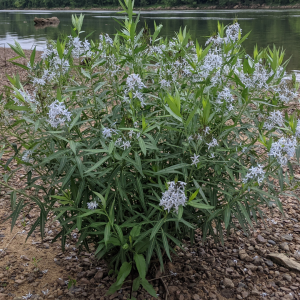 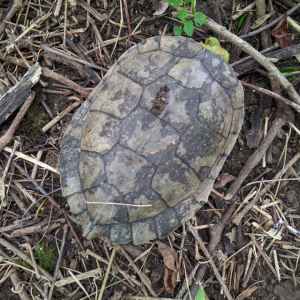 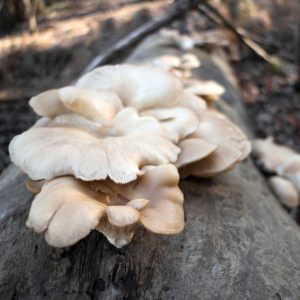 HILL'S ISLAND AND THE COMPACT

The 20 acres of Hill’s Island represent a unique setting for research and an inspiring educational forum. Rare is the opportunity to experience, first-hand, biodiversity in the Cumberland and bear witness to the power of water in the natural world. The Compact, like TennGreen, shares a dedication to the stewardship of Hill’s Island, ensuring it will remain a pristine and natural space for generations to come.

In 2022, the Cumberland River Compact worked with Dr. Learotha Williams from Tennessee State University to research the experience of enslaved and formerly enslaved peoples on Hill’s Island. His research and words are reflected in this site. 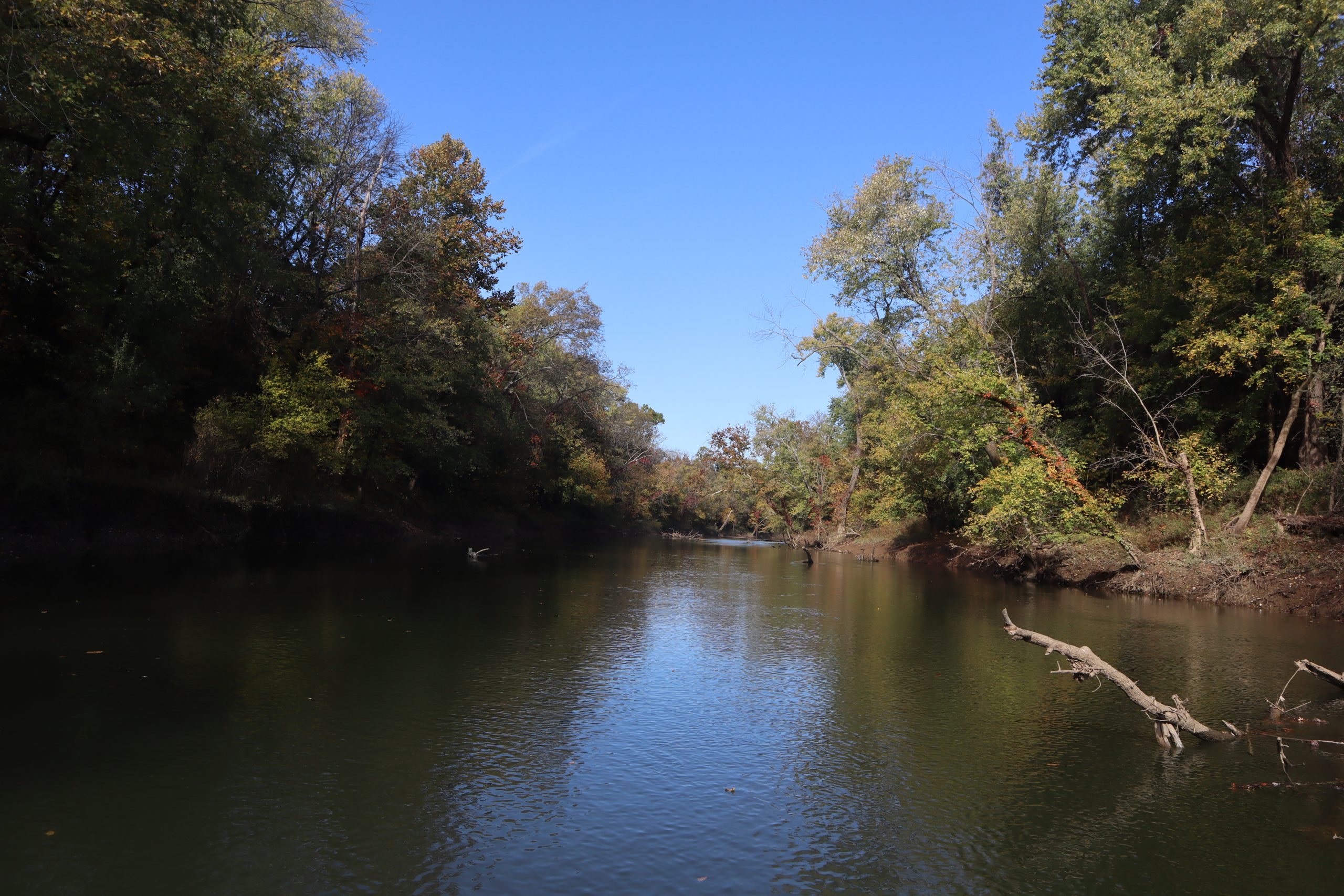 We recognize that the name Hill’s Island centers the prominent slave trader Harry R.W. Hill in the island’s story. As we discover more about the island’s cultural and natural history, we are seeking to rename the island to be more inclusive and welcoming. We are considering both a formal name change through the US Board on Geographic Names and a colloquial update that would reflect how our organization refers to the island. 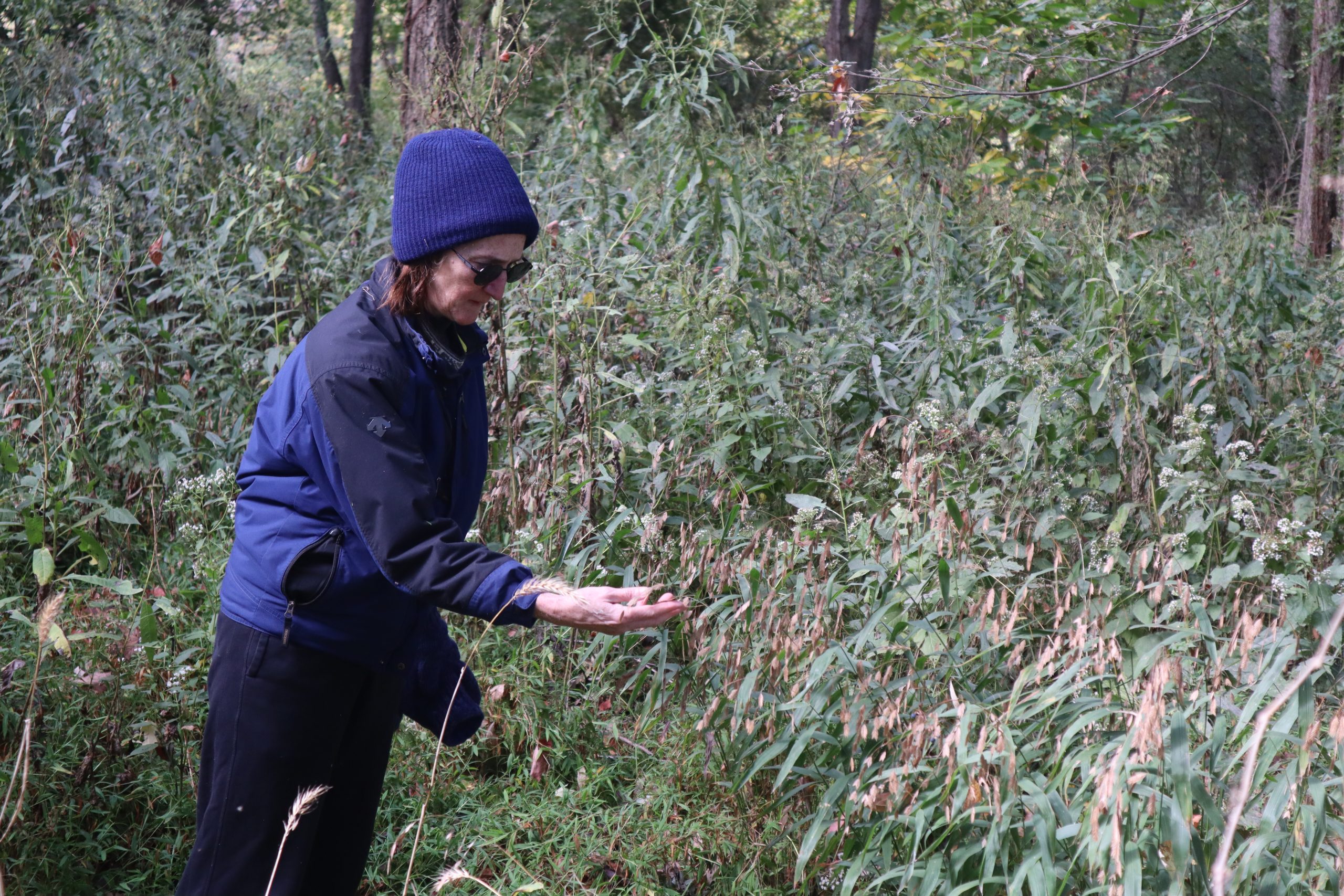 RESEARCH ON THE ISLAND

Hill’s Island is a unique island ecosystem right in the heart of Nashville, with many ecological and cultural stories to discover. If you are interested in conducting research or leading community service on the island, please contact us with a short proposal. All research on the island must have a public education component. 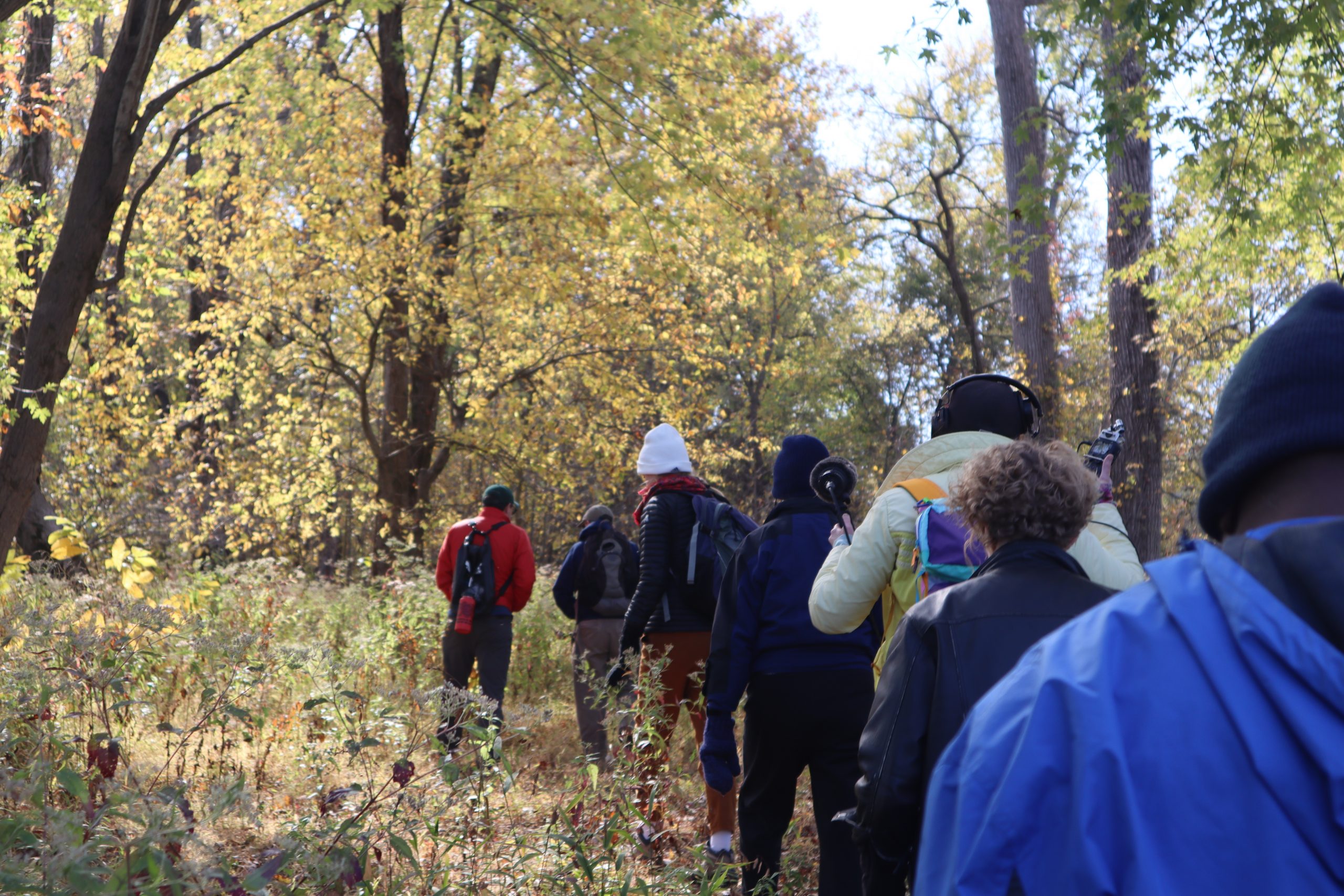 The island is only accessible by water and no formal boat launches are located on-site. Boat visitors to the island are encouraged to be good stewards of the land by avoiding destructive activities, removing all trash, and refraining from collecting plants and animals on the site.  Visitation to Hill’s Island is currently by permission only. Please contact the Cumberland River Compact for permission to access the island.